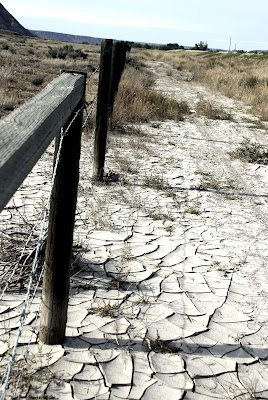 While at the farmer's market, I met a photographer who has an eye for the kind of things I'd like to shoot... that is, if I could just pip off to <insert exotic country here> whenever I felt like it. In fact, she is in Borneo at the moment on a photo shoot. I sigh in green, frothy jealousy. But it was not her exotic shots that caught my eye but her local ones.

Yes, she had a rather impressive, textural and rich collection of the rural and the derelict. I have no idea where she found the house? barn? that she shot in, but I want to find one like it, too.

When I was a child growing up in Newfoundland, just up the highway from my grandparents' cabin in Holyrood, there was an abandoned house. Salt box house, in retrospect, and it still had all the fixings-- old furniture, old stove, the kind you have to put wood inside to get hot... at least, that's what I could glean from peeking in the window and the open door. My father would never let us go inside. He went inside once and left me outside, just burning up. I never wanted to disobey him more in my life than at that moment. I never wanted to explore a place more than this old, abandoned property with the clover and the thistle and the grass growing as high as my waist, the pieces of somebody's life left behind, perhaps the magazine left on the table where someone had been flipping through it, dishes left in the sink to dry, never put away, moldy linens still in the closet and on the iron beds... 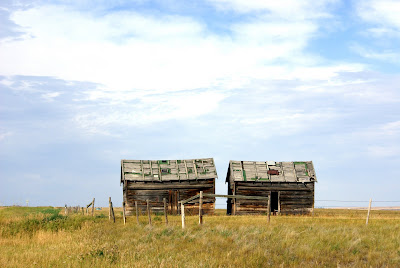 I was experiencing my first pang of nostalgic curiosity, a haunting feeling I experience whenever I saw a place like this, or watch Titanic or Schindler's List, or hold an artifact from a museum (you're allowed to do that, right? touch the old stuff?), put my grandmother's dainty gloves on my own hand or go through her purse and find a 80-year-old shopping list. It's the feeling I had when walking through the halls of Versailles and marveled that once upon a time, it too was a house and not a museum, that people looked out those windows on their drive and on their yard, or sat in those chairs, now forbidden, and stoked the now empty fireplaces. The idea of ghosts was fascinating to me, romantic, that the shades of the past could still be creeping about. I was never afraid of ghosts, just the dark Shadow Man I was convinced lurked outside my bedroom door in the hallway. But he was not a ghost. 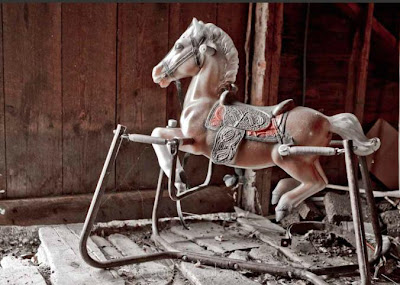 So the photograph I saw that really captured my attention was one of a bouncy horse, a toy that I'd had as a child. It sat in the ruins of whatever place she was photographing, this symbol of innocence and childhood just cast aside. Why was it left there among the bottles and the cans and the other remnants of desertion?

I've been trying to convince my husband to take me on an excursion into the deep, red-neck countryside of this province so I can trespass or creep into the derelict and abandoned barns along the way... The best he's done so far is take me a 20-minute jaunt to the outskirts of town, where our adventure will continue next time. 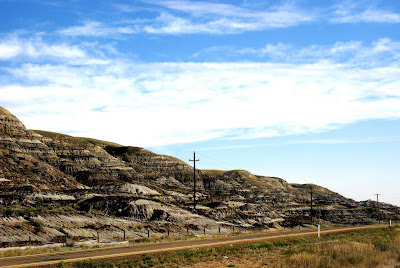 Until then, I highly encourage you to visit her site and to take a look through the galleries. You may wonder why I am promoting another photographer's site, that it will hurt my own business, but to summarize one of Ayn Rand's philosophies rather crudely, we should not be afraid of others' greatness or attempt to squash it. It is a small person who fears the accomplishments of others. We do not fail because others are successful. We fail because we ourselves have not achieved success or greatness. So, waxing philosophical aside, check out her galleries. They're great. And visit mine while you're at it.
Posted by AP at 1:07 p.m.