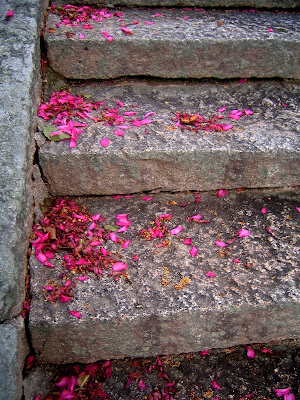 Check us out! Featured. Can you believe it? Here's the photo that turned heads. It was taken on Etajima, an island near Hiroshima. It was the beginning of summer. I've often described the humidity of Japan to liquid air. That day was no different. Etajima is not known for having a lot of sakura... in fact, the island was covered, and I mean covered, in citrus trees. The ground was littered with rotting orange orbs. Imagine the smell? Kinda glorious. These steps went up and up and up to a temple? shrine? can't recall (will have to ask hubby, who has a steel trap memory) and happened to have the dried out petals from a lonely, lonely cherry blossom tree-- not the typical wimpy pink, as you can see. Captured this shot with a Canon point and shoot.

Our Facebook page just about had a heart attack. It vacillated between 47 likes and 1,291 likes for about an hour. Glitch, or the fickleness of the adoring (or not so adoring) public?
Posted by AP at 10:03 a.m.