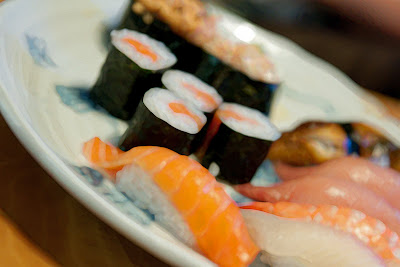 My Oliver turned 100 days old on Tuesday. It's a big thing in Asian cultures, the 100 day thing. If we'd been back in Japan, he would've been dressed up, plonked on the lap of the oldest family member, and grandma or grandpa would've pretended to feed him fish. It's a symbol of health and strength and that he'll never go hungry.

Unfortunately, all Oliver's grandmas and grandpas are about a 10 to 12 hour flight in either direction, so we did the best we could... dressed the kid up in a jinbei and went out for sushi. I don't post pics of family, but the look on Oliver's face as my husband pretended to feed him a piece of raw salmon is priceless. Oliver's eyes seem to be  reaching across the table pleading for help!In the meantime, here is one of the sushi shots I have from dinner. I'll be uploading some sushi and tea shots eventually to the gallery, some artsy, some in their original states. In the meantime, try not to lick the screen.
Posted by AP at 11:09 a.m.