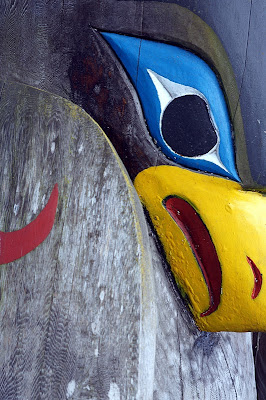 I thought I might regale you with some humour or some puns about totem poles. So I Googled, literally, jokes about totem poles. The result? It's kinda like when I was in junior high and did an internet search for a home economics class. Nutrition.Typed in milk. In the case of the former, I ended up with a plethora of sites devoted to jokes about Polish people (Poles... Do they even like to be called Poles? Is that PC?)... and one site of people attempting to make up totem pole related jokes. (Colossal failure. In case you need a few brain cells to die, please view said attempts here, none of which belong to me. Please note the emphasis on ANY, as if the poster were desperate for totem pole humour. OH MY GAWD. Aren't there ANY jokes??? But I digress.) In the case of the latter search, why oh why would a search on milk (with the safe search squarely on, in 1993, in a junior high school) result in an inundation of porn? I ultimately did my project on caffeine, the benefits thereof, a lesson I would carry with me to university.

So instead I'll tell you about our trip to Victoria, home to a number of spectacular totems. And Poles, I'm sure, but I haven't looked into that yet, whether there is in fact a Polish community in Victoria and/or if such a community would warrant the adjective spectacular.

Our first trip to Vancouver Island, we had just a few hours to spend in Victoria before our flight left. We didn't go far, so I decided to spend the last few megabytes I had left on my memory card shooting the totem poles near the museum. My husband's voice suddenly hits octaves I didn't realise possible as he squeaks excitedly, "Animal! Animal!" 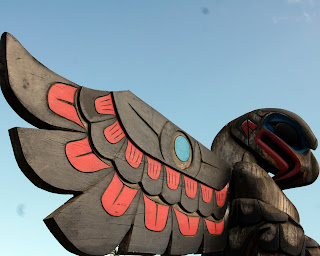 Okay, so my imagination is going crazy here. First of all, I can't see what he's seeing, mostly because yelping "Animal! Animal!" leaves an immense slideshow of possible animals running through my brain. You yelp, for example, "Platypus! Platypus!" and my mind envisions the platypus and the eyes start looking for him, making the platypus more readily identifiable. I'm no neurologist, but I do believe it helps to know what you are looking for. The only thing I could conclude in those panicked seconds is that it must be an animal my husband has never seen before and therefore cannot identify by proper name.

So, the thing is, to my  knowledge, there ain't much my husband hasn't seen. I am bit of a zoo junkie and make my husband take me to the zoo in pretty much every major city and country bumpkin small town we visit. (Remind me to tell you about my experience at Ueno Zoo sometime), and hubby o' mine is on the up and up on dog breeds, too. He's no animal slouch. So what the heck animal is he seeing that he doesn't know the name for? 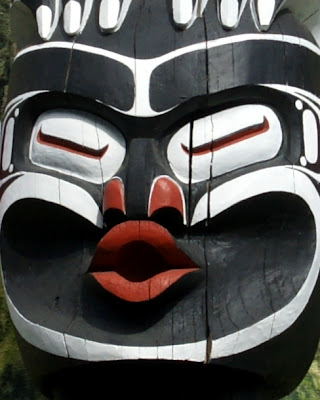 I began to wonder if I was going to photograph said mystery beast and therefore inadvertently document the last moments of my life, and would the pictures be shown at my funeral?

The end to this story is not nearly as interesting as the beginning. Evidently, my husband has never seen a North American raccoon before. Ja. Fer real. Raccoons. A pair of the critters. It makes sense if you've ever seen a Japanese raccoon, called a tanouki (Mario Brothers fans, remember the tanouki suit? Yeah. Raccoon suit.) and you'll totally get why the coons on the lawn were totally alien to him. But still. We had to add The Raccoons to the list of TV shows my husband has to watch in order to not freak out his wife unnecessarily better understand Canadian culture.

It was a good experience, though, because the next time he hollered "Animal! Animal!" at the corn maze a year later (in that case, for prairie dogs popping up and down like those gophers you whack in a carnival game), I knew I wasn't in immediate peril or going to die. 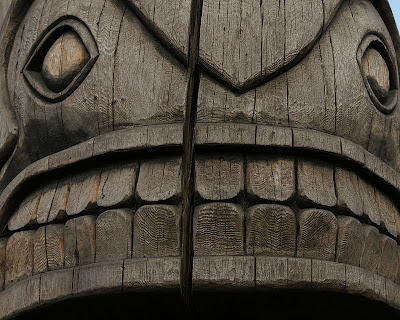 In the meantime, now that you've made it to the anti-climactic ending of my totem anecdote, I hope you've enjoyed the images. Some of them were in fact taken in Duncan, on Vancouver Island, where, if you must know, a wasp crawled down my decolletage during the shoot. (For our concerned readership, my spheksophobic cousin was obliging enough to coax the wasp out and my bosoms escaped unscathed.) I find that some of the shots really work well as a set, and if you're interested, they'll be available for sale shortly. In fact, a huge variety of totem shots are going to be available. And you don't have to tote'm to your house. We'll mail 'em.
Posted by AP at 8:49 p.m.