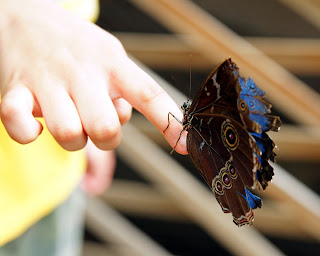 I have yet to work up the courage to photograph people a la National Geographic. Not that I am on the hunt for naked people or anything (I'm pretty sure that during the first week of university, with all the newbies in town, I could find plenty of people running around campus without clothes... though perhaps that would not be as poignant as a NatGeo nudie...) but I am rather envious of a friend of mine's ability to snap the most colourful people, most notably, the folks she snapped while in Peru. I have a couple of theories about why she gets away with snapping people without them posing and/or hurling rotten fruit at her for her presumption slash gumption: One, she has a giant lens and is so far away from her victims subjects that they have no idea they are being photographed. Two, I think if she is espied snapping without permission, that they assume she doesn't speak English. She does, perfectly well, but there is a false, invisible language barrier that people put up between themselves and others that prevents them from experiencing things they want to, or in this case, chewing out the brazen photographer. Two and a half, perhaps she doesn't care if they do feel like hurling rotten fruit, is not so self-conscious, and shoots regardless of what the opinion might be. (And this, I think, is the point I am most jealous of!) Three... and I hate to say it, but I think a lot of people assume that people of her particular culture are born with a camera in their hand. Not so, not so, but who am I to pretend like stereotypes don't exist and feed our perceptions of others and/or (mis)inform our own actions?  (And YOU thought you were going to read a fluffy blog entry on butterflies! Whoops!) 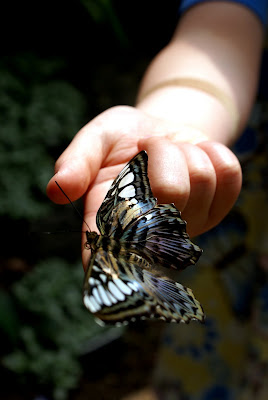 Meanwhile, I, on the other hand, am terrified that people will get angry with me if I try to shoot them without their permission. Or pose. And therein lies the Catch 22-- I desire consent, but consent often results in posing. Perhaps I need a bigger lens... Start buying some prints, people. Mama needs a bigger lens to stalk capture poignant images of unsuspecting folks on my urban photo excursions.

Which is kinda why kids are so much easier to photograph. They are so unassuming and not as self-conscious as we are... or if they are self-conscious, it is a very endearing, photograph-able self-consciousness, not the kind of self-consciousness that prevents this photographer from shooting candid portraits on the fly. They (the children) have been instrumental in capturing some of the best butterfly shots, wouldn't you say? In my attempt to keep my subjects anonymous, I've zoomed in on bits of them rather than on a portrait... in the case of the butterflies, the focus has been those adorable little hands the butterflies cling to.

Butterfly Girl was shot last year. I was on my way out of the butterfly house with a few really lame snaps that I think I deleted the majority of when I got home. This little girl was standing rather shell-shocked near the door, hand thrust out as if she were afraid a single breath would disturb the butterfly sitting on the tips of her fingers. I think she was even more dumbfounded when I asked to photograph her-- or rather, photograph the butterfly. It wasn't until I got home that I realised she was wearing a butterfly dress. How perfect. 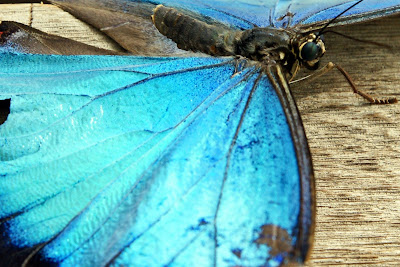 This year, for the life of me, I could not get the blue butterfly to open its wings. When they are closed, the butterfly is the colour of bark. Beige, boring, cardboard-coloured bark. Opened, of course, the wings are a brilliant blue or purple. It wasn't until a very enthusiastic little boy approached and  with uncharacteristic gentleness encouraged the butterfly to rest on his fingertips did it finally, finally, finally open its wings. Snap, snap, snap. Butterfly Boy was more than happy to let me photograph his achievements.

In the meantime, I think I may make it my mission this year to shoot some urban candids: that is, to photograph people without their consent. I'll let you know if I survive the endeavour.What are your thoughts on shooting people without consent? 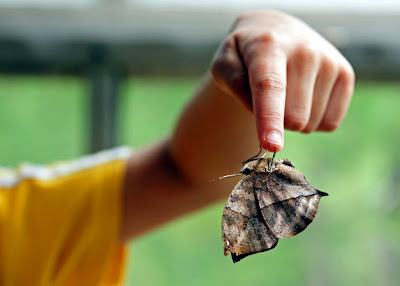 In the meantime, if you thought to come and just look at some pretty pictures of butterflies, hit the gallery here. All the butterflies (and their little dragonfly friend) are available for purchase at the webstore.