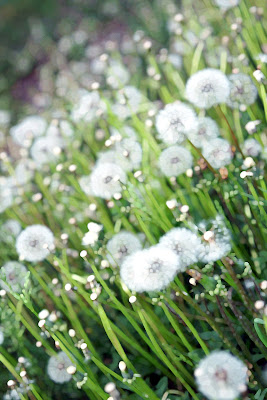 I am a huge dandelion puff fan. If my father reads this, I'm sure he'd groan, since he spends a lot of time making sure they stay off the lawn. If he could, he'd set up some sort of invisible force-field to ward off blowing dandelion seeds. Not to mention, in this part of town, if you have one of those yellow heads peeping up from your yard, the neighbours might revolt. This is one manicured neighbourhood. Neighbour wrath aside, the real peril is the trek out to photograph the puffs. The mosquitoes around here travel in gangs. I am fairly certain they're responsible for our city's graffiti problem. They are definitely responsible for the puffiness of my derriere, which was attacked without mercy on the occasion of the puff photo shoot. I was wearing several layers of denim that particular evening, not as an homage to the denim-on-denim fashion atrocity of the 80s, no, but as skeeter armor. It failed. It did not deter the skeeters from getting me in my largest of targets as I bent and squatted to get my shots. Folks, there is nothing elegant about a vigorous bum scratch, not even if the other hand is gripping a beer. Alas. Considering all the floral shoots I've been doing this season thanks to the discovery of apple?cherry? blossoms in the 'hood, it would come as little surprise should my bottom swell to titanic proportions. Rest assured that in such an eventuality, I will photograph it for the posterity of my posterior.


I tried to get a little creative with the puff images. I love the sort of natural watery-ness to the images, the melding of the greens and shadows that sort of came about naturally. That sort of thing lends itself to a little artistic filtering with good old Adobe Photoshop. I find that this kind of artistic playfulness lends itself well to the puffs,especially not everybody might find framing and hanging dandelion fuzz on their wall quite as charming as I do. 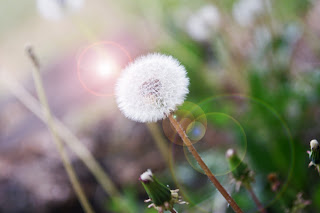 I don't often fool with the images, filtering them and whatnot, but when I do, I like the results. In some cases, an artistic filter can salvage a shot I might have otherwise deleted. I once read the testimonial of a photog who won a prize in National Geographic's wildlife contest where she said she was about to delete the blurred photo of a running rabbit, but thought better of it, and used a filter to sort of play up the motion blur of the critter. Almost garbage, now a winner. I'm no Picasso (or Ansel Adams, for that matter), and some folks aren't into photography, but if you turn the image into a painting-esque print or something? Instant wall art. What do you think? To filter or not to filter?

Either way (shameless webstore plug ensuing), the puffs au naturale and avec a filter will soon be available for purchase.
Posted by AP at 10:57 a.m.