I do not have a macro lens. I once aspired to shoot petal textures and  have oh-so-artsy renderings of them all zoomy and close up, but I gave it up. Plenty of people out there can zoom in on a flower or a ball of yarn and achieve greatness, provided they have a swanky macro lens. No, I discovered that I'd rather shoot other things. Until I met this fellow, and wished a thousand times over I'd had a macro lens. 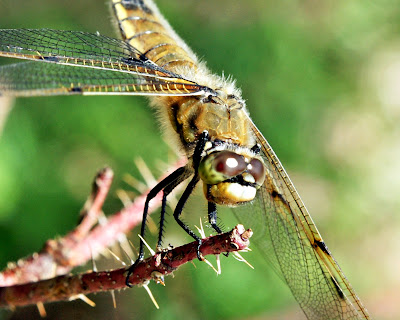 This dragonfly was quite possibly the most accommodating bug I have ever encountered. He perched right there on his little thorny twig and let me shoot him from all angles. He even tilted his head a few times, adjusted his wings, gave me a wink and a smile. Of course, in my exuberance (and fear that the closer I got, the more inclined he would be to fly away), I completely disregarded the optimal focal length for the lens I was using and went in for the kill... or rather, the close-up shot. Naturally, my focus was never ideal... either the head or the body would be slightly out of focus while the wings were crystal clear. That'll learn me. 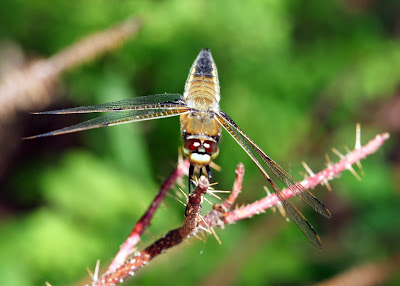 The first dragonfly I ever shot was in my Nan and Pop's yard. It was quite possibly the size of my pre-pubescent hand. I, at the time, was sporting an $8 camera... was it an 18mm or 35mm camera? I can't recall. It was about the size of a Hershey's chocolate bar, only a little thicker. It took horrendous pictures. Or rather, I took horrendous pictures. (Can't blame the tool; blame he who wields it.) I am certain that dragonfly picture is in one of those albums with the gummy pages, wedged in next to the sticker albums I kept. Actually, what would be neat to have is that old Hershey bar camera so I can take some retro looking photographs. Isn't it funny how they're coming back in style? People clamoring after old cameras, or using Photoshop to add some 70s vignettes. But I digress. 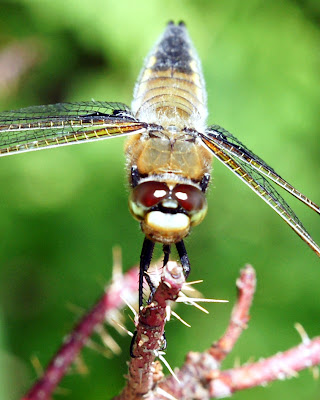 I thought I'd share some of the images anyhow. I am not certain if they will make it to the webstore; you certainly won't find them on the cover of National Geographic or anything. You'll have to let me know if you're interested in a copy, or at the very least, if it's not too embarrassing to try and sell them. Still, I rather enjoy how you can see the detail in his little legs clinging to the twig, and the beauty of his wings. And, doesn't it look like he's smiling?