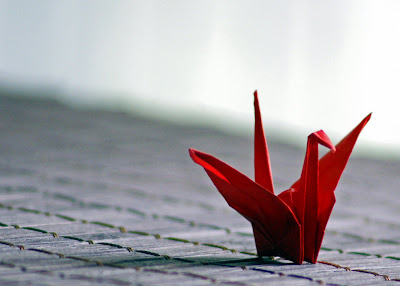 Just started a bit of a photography project that could quite easily turn into an obsession. I folded my first paper crane yesterday from a 7cm square piece of paper. Evidently, the smaller the paper, the harder it is to fold. Wish somebody had told me that before I attempted origami. Me not smart...(then again, starting small meant I had to try extra hard to be precise, and it paid off, that level of meticulousness...) and to be honest, I thought that the whole folding paper thing was really going to be a challenge for me. I can't even put the duvet cover on without a struggle, or fold a hospital corner. What turned out to be the challenge were the instructions. I think I watched and read four or five different sets of instructions and videos about folding a paper crane before I stumbled on one that actually made sense to me. If I had any doubts about my learning style, well, yesterday's adventure in origami instructions confirmed that I am indeed a visual learner. 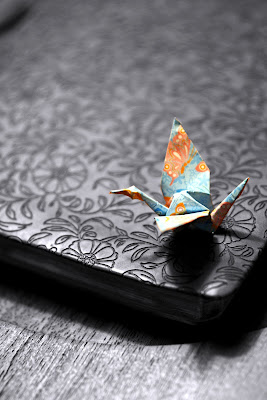 I'm not going to lie, though. I have a thing for paper crane photographs. And now that I can make them, I can take as many pictures as I want. The trick is getting the camera to focus on the little beak, or it all goes hazy.

There's a legend in Japan that if you fold a thousand paper cranes, your wish will come true. I'm sure you've heard the story of Sadako, the little girl who got a million kinds of cancer after the Hiroshima bombing. She folded a thousand paper cranes so that her wish (to live) would come true. Though she folded the cranes, her wish was not granted... nevertheless, in the Hiroshima Peace Park, you can see thousands of paper cranes strung together like gaudy curtains, folded and hung by schoolchildren. The next time I'm at the Peace Park, which should be this November, I'll take a few shots so you can see what I'm talking about. If you go yourself, I swear, zoom in on those masses of paper cranes. You could have the least sophisticated point and shoot on the planet and you would still walk away with a stellar pic. People would admire your artistic sensibilities. 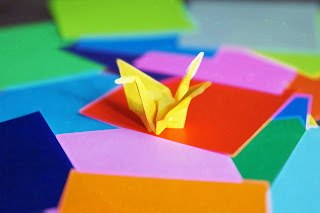 If you also ever find yourself in the Hiroshima Peace Park, I recommend going in August on the anniversary of the bombing. It is not the depressing boo-hoo fest you might think it would be. In the morning, the same ceremony is held every year-- poems are read, prayers are recited, some of the survivors speak, doves are released, and people wish for peace. (I've read articles where some folks think the Japanese are condemning the Americans for the bombing, but that's not what the park or the anniversary ceremony are about at all). Mostly I wonder what happens to the doves. Do they come back? Forget about trying to shoot the doves, though, not unless you've camped out overnight in the park (which the Japanese would never allow) to get a front row seat.

It's the evening, though, when you'll want to whip out your camera. Thousands of lit paper lanterns are set on the river in the twilight hours and into the night. Each lantern is a wish for peace. The opportunities for amazing pictures are countless, provided you have a tripod (and/or a ridiculously steady hand) and know how to use your camera in the dark. I'll see if I can dig up some of my lantern images one of these days. They were taken on a point and shoot (and no, I didn't have a tripod..) and I can't remember how good or poor the quality is.. But check back August 6th and you may find that I've posted a few of those old pics.

For other photographic opportunities, don't forget to check out the art displays made and sent by children from all over the world. It's something different every year, and again, you zoom in on some of that artwork and you have instant genius photography. 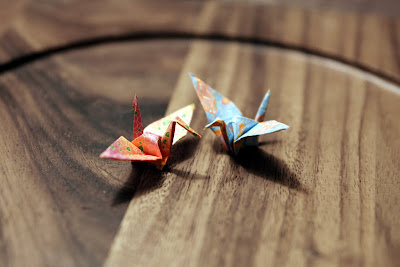 Now, I know you can fold origami out of anything. Folks do it out of Starburst wrappers and newspapers and toilet paper and and and... but the  paper I've been using, the gorgeous paper, has all come from www.omiyage.ca, if you're interested in getting in on your own origami paper project. In the meantime, I'm trying to come up with new and creative ways of photographing origami cranes. I'm thinking garden shots, newspaper origami, tsuru parades... what else? Suggestions welcome!
Posted by AP at 4:27 p.m.