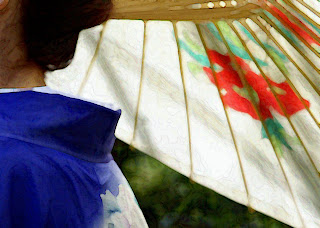 Every year (I say every year like we've been doing it for decades... let's try again...) Every year since we moved here we've gone to the Japanese cultural festival. The Kurimoto Garden is crawling with people, which is nice, but inevitably makes it difficult to photograph. I hate seeing so many people in a garden like that. It inspires the same feeling I get when I espy somebody with greasy fingers going to touch a painting or something. People are going to chide me, I know, for the unrealistic-ness of it, but I want my garden shots sans people. In fact, I want all my landscapes and (shock!) cityscapes to be without people. Or, at least if I'm shooting the city, with nondescript people. This, of course, did not happen at the Japanese cultural festival, and you'd think after three years trying, I'd give it up and go on a sleepy Monday afternoon or something. At least then I could snag the bridge shot without people hanging off it like a celebrity they didn't expect to see buying coffee at Tim Horton's. 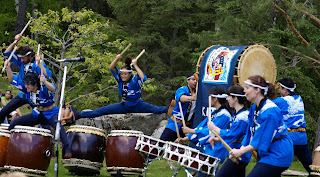 One of my favourite parts of the festival, other than all the white folks walking around having conversations in Japanese with one another, is the taiko drumming. I swear there's an intrinsic response we all have to the banging of a drum. C'mon, you can't tell me some part of you doesn't respond on some primal level to the timpani banging away George of the Jungle. The thing is about taiko is it's not just about the drumming (which is wonderfully tribal), but that it's a performance. Tres Japanese, no? Getting involved in taiko, at least in these parts, is no easy task. It's not like joining up with some music group and learning how to bang the drum. No, it's pretty serious stuff, and they only accept you if you are already drumming at a particular proficiency. Lord knows how you're supposed to get to that proficiency without joining the group, but there goes a circular logic that is beyond me. Perhaps you're meant to play one of those taiko games at the Japanese arcades to get your start... All I know is, the taiko is pretty spectacular, and I do not encourage you to buy the CD. Hit a live performance if you can.

You can also catch taiko drumming at performances of kagura, which is a folksy version of kabuki, only way more entertaining to watch. More exciting. Lots more movement, speed, colour, masks, dragons and demons, costume changes, action, love, hate, betrayal.... not to mention the drumming! although I am uncertain if there are any kagura (or kabuki) performances in this corner of the globe. Perhaps a trip to Japan is in order for you folks? 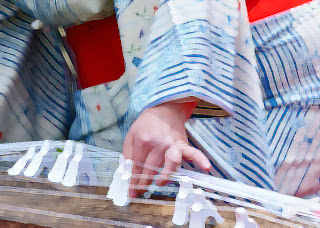 In any event, to avoid the t-shirt and shorts wearing crowd at the festival ending up in my shots, I find myself taking snaps of pieces of the festival-- the collar of a kimono, the spokes of a rice paper umbrella, hands writing calligraphy the carving on a great iron bell... I'm hoping over the next year to put together a rather substantial Japanese-inspired photography collection... food, origami, tea, dishes, kimono, obi, lanterns, shoji, shrines.... If you're into that sort of thing, it might be worth a visit to the gallery over the next six months as it's updated to see what I've been up to.
What are your favourite parts of a festival to shoot?
Posted by AP at 10:53 a.m.